The Holiest Book in the Universe

The Chumash, (rooted in the word Chamesh, which means five) is the collective name given to the first five books of Moses, which begin the larger corpus of Jewish texts known as Tanach. These books of the Torah, compiled from the prophets, make up the written covenant and the original old testament.

The books of the Torah begin with Genesis (Bereishit), which tells the story of the creation of the world, the founding of the Jewish people and the descent of the original Israelite families into Egypt, leading to their enslavement. 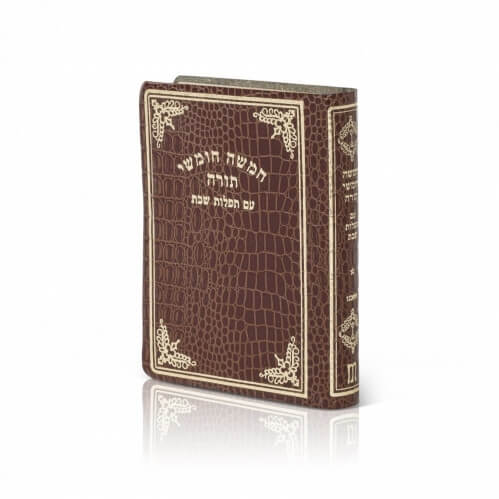 The second book, Exodus (Shemot), details the miraculous redemption from Egypt and the Israelites foray into the desert towards the holy land. As this journey begins, the people gather around Mount Sinai to receive the Torah, the entire compendium of God’s will. It is to be a spiritual and technical guide for all stages of life, both on the personal dimension and the national sphere.

The first this word uttered by God at this apex moment is the word Anochi. “Anochi” means “I”, as in “I am the God who took redeemed you from Egypt.” But the kabbalists reveal a hidden depth behind this simple word.

Anochi is in fact an acronym for the phrase “Ana Nafshi Kasavis Yahavis” – I wrote down My Soul and gave it you.” God says to the Jewish people, “All of my desires for the universe, all of my aspirations for creation as a whole are contained in this book.

A Tradition of Power and Depth

This is why Jews world over have put tremendous emphasis on purchasing chumashim (the plural of Chumash). It is crucial that any spiritually focused home should contain a copy of the printed will of God.

The five Books of Moses are broken into fifty three separate Parshios (weekly Torah Portions). Commentators and meta-commentators (authors who write works that expound on the works of other explanations, also known as super-commentators) have spent thousands of years delving into each aspect of the Torah and elucidating its spiritual, ethical, directive and scriptural implications. The most commonly spread explanation of the Chumash is the commentary of Shlomo Yitzchaki, known as Rashi. This explanation is printed in nearly all Chumashim. In fact, it is common practice to read the entire weekly portion with the commentary of Rashi. Others read the translation of Onkelos into Aramaic.

Tapping into the Seasons

When the custom of reading the Torah in a communal fashion was first instituted, the process took three years. Each Parsha was broken into the three parts, and thus the fifty three Parshiot were spread out. This was called the tri-annual cycle. There are congregations today who have returned to this custom, however it is not mainstream practice.

Eventually, the process was consolidated. In the new format, one Parsha is read every week. The term “new” here is relative, as this custom is roughly one thousand years old. What is neat about this system is that now each Parsha falls out in roughly the same calendar spot from year to year.

The Shlah (A fourteenth century kabbalist) proves with countless examples and proofs that this system is divinely inspired in that each Parsha of the Chumash falls out in an exactly apropos slot. The Lubavitcher Rebbe called reading the Parsha “keeping up with the times” because of how neatly it explains the progression of holidays and rituals around the Jewish calendar as well as current events.